Yes I know I’m late. The shows already aired 50 episodes and here I am attempting to do recaps. Since I decided to start blogging a little late, all things were naturally going to fall in the same succession. So why bother at all since, there isn’t much to recap?…I freaking adore this drama! That’s why ㅋㅋㅋ.

The episode begins with Yoon Hee (Kim Nam Joo) weeping at the loss of her miscarriage. She feels guilty towards her unborn child, telling Gwi Nam (Yoo Joon Sang) how she didn’t even give the child a nickname. Insinuating that she never made any time for the child, and maybe the child knew of this from the womb and decided not to come to the world. Gwi Nam also shows regret, as he holds his wife and tells her that maybe he wasn’t ready to be a good father either, and that’s why it wasn’t meant to be.

The scene then moves on to the drama’s most popular couple that takes the audience away from the tears that they’ve just encountered.

Yi Sook after having told Jae Yong that they don’t belong together because of their social differences in the previous episodes, begins rethinking her emotions and her choice to not date Jae Yong, and so K-drama style, she abruptly gets off the bus with a jog that gradually builds up to a run chasing after her feelings for him.

As she reaches her work place, Jae Yong is already there, calling his friend asking to meet up for a drink ’cause he feels like shit after being dumped by Yi Sook. Just as he does so, he notices Yi Sook has turned up again. Hanging up, before he can reach for her, he receives a call, from none other than Yi Sook herself.

She rambles on the phone, unable to gather her emotions. He stands behind her, confused, as she says, ‘I’m willing to give try…’. Jae Yong in his naturally clueless voice, asks ‘uh, okay, willing to do what?’ She clarifies and we see that shit eating grin all over his face. He’s obviously ecstatic, and he wastes no time in dating her, making her even pinky promise.

Switch back to the sombre mood of the household, Yi Sook finally finds out from Il Sook that Yoon Hee’s had a miscarriage. The three sisters, saddened over the news, all agree that they want to help Yoon Hee in some way. Even Mal Sook, who goes ahead and questions whether it was her fault, for the travesty that struck. Looks like there is a sane part to her :p

Childish as he is, he’s still charming. 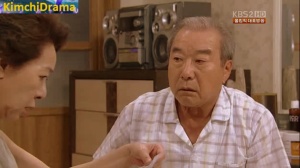 Um Cheong Ae (Yoon Yeo Jung) finds money that Yang Shil left behind. She appears confused, since her sister in law is without a house and worries for her. While her husband, says nothing to avoid bringing up the truth.

Yang Shil while having to share rooms with Halmeoni, ends spilling more tears as she realises that Halmeoni doesn’t actually hate her, but considers her, her own daughter. All the more reason as to why she’s so hurt by her actions. Halmeoni offers to move away with her, so she can live with a burden less heart.

Jae Yong having a conversation with Gom Taenggi, his very own Yi Sook. The excitement of dating has gotten to the poor guy. 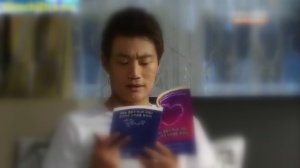 Love sick Jae Yong decides to read up on dating. He even notes how women admire certain postures, along with men looking sexy as they pull on their tie in frustration as they do paperwork…the only problem is, he has no paperwork…but knowing Jae Yong he’ll find some receipts to cover up for that. 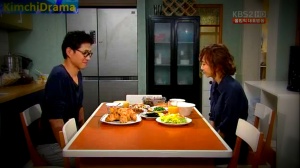 Meanwhile, Yoon Hee isn’t up to facing the world just yet. Nevertheless, her family, yes that includes her in laws are right there to support her. From Yang Sil, to her mother and father in law bring her breakfast, in case she has no appetite. Now that’s what you call family ^_^

We come back to the sweet love line that has Korea rolling for more, and Chun Jae Yong is there sharp and early to pick Yi Sook up for work. She complains, it’s too much hassle for you, why go back and forth. He lightly tips her chin and says it’s the ways of dating. Like I said charmer! 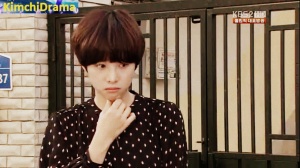 Yi Sook caught off guard by a little morning skinship.

She finally discovers make-up! lol this reminds me of my sis’ and friend. Tackle the ape that hasn’t touched make-up even after leaving her teens- crime! XD

I love the fact that he always does what he says, he takes the word from the book like it’s word of the Bible. Ah~ the goofiness of being in love.

So much for sophisticated and beautiful, let’s just yell out the car window to the a-hole who won’t stop horning at me! 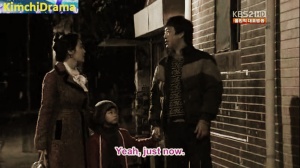 Gwi Nam accidentally eavesdrops on Yang Sil’s secret wish she confides in Minji (Il Sook’s young daughter). If there was one thing she could change, it would be the mistake that she made that fateful night.

And…Nam Nam Goo’s back. If she won’t take him, then he’ll threaten her with a Yoon Bin scandal. Gah, you’d have thought he’d learn his lesson from having met the Bang women, but apparently not. He’s due for another session, hopefully the writers of this show will book him in early. 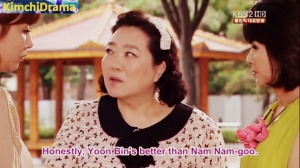 But never worry! Uhm sister’s FTW! no really Yang Hee Kyung is one of the sweetest ladies in Korean television. She been around ages and she loves acting to bits. If you haven’t seen her on ‘Happy Together’ for this drama’s promo’s then you really should.

So after, a few cute scenes with Yi Sook and Jae Yong, who fakes nonchalant at seeing his girlfriend in a dress only to have a spazz attack worthy of an applaud from even a fan girl when she’s not around. The rest of the family,  prepare an event for Yoon Hee.

Knowing Yoon Hee and her psychic abilities, she knows something is up. As Il Sook takes her up to the rooftop, she can’t hold back, as she realises, she has so much love from the people she initially didn’t want. I think this episode really summed up the word family quite neatly, and so the episode ends with Yoo Joon Sang singing her a song, with Yoon Bin accompanied on the piano.

The entire family comes together to show Gwi Nam and Yoon Hee their support as they tie the knot for the second time.

p.s. Trivia:  For any one who is as clumsy as me and hasn’t figured out the pun on Gwi Nam’s name yet, 방귀 (Bang Gwi) just so happens to also mean ‘fart’ in standard Korean.

Show some love, rant, spazz and anything else in between :D Cancel reply